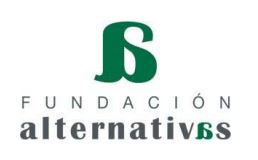 Fundación Alternativas was born in 1997 with the intention of being a channel of political, social, economic and cultural reflection in Spain and Europe, within the framework of a growing globalization.

It is a meeting place, of discussion and elaboration of ideas and proposals in which the most dynamic and advanced actors of our society participate. The central objective of the drivers is the analysis and definition of new ideas, addressing the meeting of citizens and society as a whole. In addition, we aim to make proposals to political parties and other economic and social actors with the intention of incorporating them into decision-making.

Areas of work encompass all public policies, both from a national, European and global perspective. These areas find their development in the different departments of the Fundación Alternativas that can be consulted in this web. Thus, the Alternative Laboratory appears as the place from which it is intended to encourage the elaboration of rigorous proposals to issues that concern the citizens.

The Foreign Policy Observatory (OPEX), as the name implies, is dedicated to the analysis and elaboration of proposals on Spanish foreign policy and its follow-up in the European and global framework.

For its part, Estudios de Progreso is a program aimed at young researchers so that they can contribute new ideas and alternatives to contemporary problems.

The Culture and Communication Observatory (OCC-FA) is set up to study, analyze and propose initiatives in the cultural and communication sectors, both in Spain and the European Union, as well as in Latin America and Hispanic territories in the United States.