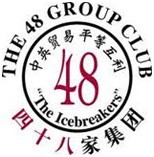 The 48 Group Club was formed in 1991 to maintain the spirit of the original pioneers. An informal and friendly outlet for networking and social contact between people from business, cultural, diplomatic and academic circles, the Club was established for anyone with interest in and association with China trade. The Club’s motto provides a fitting continuity between the pioneers and the new generation – ‘Equality and Mutual Benefit’.

The 48 Group Club is an independent business network committed to promoting positive links with China. The Club’s history goes back to the early 1950s, when the founding “Icebreakers” were the first Westerners to break through the worldwide trade embargo on China and establish mutually beneficial trade relations with the newly formed People’s Republic of China.

The Club now has over 600 British and Chinese members, both corporate and individual.

Member companies and institutions vary in size from the multinational to the micro and come from all sectors: industry, commerce, government, education, sports, culture and the law, and others are high-level politicians, diplomats, academics and individuals and groups focusing on cultural relations.

The Chairman in office is Stephen Perry.

The Club offers an extensive programme of events that are an important – and often key – means of establishing and maintaining contacts (guanxi) for those active in building friendly relations with China in any field from commerce to culture.

Over years, this commercial group, funded by its members, grew to be the most respected name in China-Britain trade, a name well known throughout China. The Group provided support and consultancy services to British companies entering China’s markets.