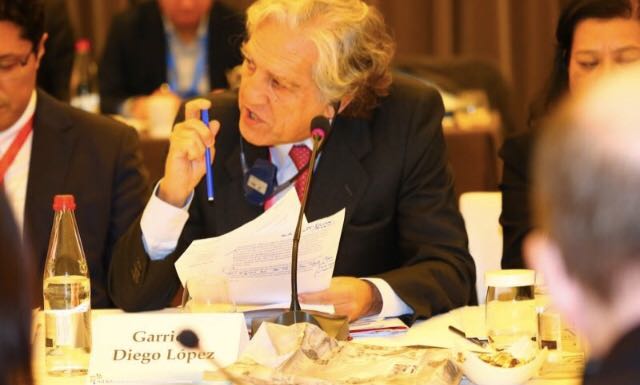 it is a pleasure to be here in Paris for this year’s Annual Meeting, representing Fundación Alternativas, a progressive and firmly European think tank based in Spain, to discuss the evolution of this partnership, and its commitment to making the New Silk Road as inclusive and mutually beneficial as possible. That is what the Belt and Road Initiative, and its emphasis on multilateral dialogue and commercial cooperation, should ultimately be about, and the reason we are gathered here.

As we all know, the international order appears to be shifting, with the United States’ government retreating from multilateralism, free trade and its traditional position as the main state actor defending these principles. Meanwhile, the Popular Republic of China is embracing its condition as an economic leader, and stepping up to present its vision of a global order based on peaceful cooperation and win-win trade policy. Our task, as part of SiLKS, is to provide the related intellectual perspective through the research and knowledge we create, so relevant in the face of an unstable political and economic order.

Exactly last week, Spain received the Chinese President Xi Jinping and the rest of his delegation, highlighting the common interest in developing a closer diplomatic, commercial, cultural and academic bilateral relationship. Multiple agreements were reached in these respects. In light of the recent development of a Connectivity Strategy between Asia and the European Union, theSpanish public and private sector have expressed great interest in collaborating on specific projects associated with the New Silk Road.

As one of the founding members of this network, a creation that took place in our home city of Madrid, Fundación Alternativas is in the process of extending what is already a long established association with Chinese institutions, such as the Counsellors’ Office of the State Council, and developing new ones, with the Association for the New Silk Road, for example. At our last meeting in October, we signed an agreement for strategic cooperation with the latter, which solidifies our relationship by establishing an alliance for the Promotion of the Belt and Road Initiative and a think tank dialogue with our Chinese partners.

Unsurprisingly, Spain is eager to represent an influential third actor, linking the relationship between China and Latin America with a European partner. In line with this, we have decided to compile a report where our associated researchers will work alongside Chinese researchers to identify the potential of this triangular connection. Furthermore, our institution looks forward to, yet again, organizing high-profile events related to the New Silk Road, such as the ‘Sino-EU-Spain cooperation’ symposium of 2014, or more recently, the forum that discussed Madrid’s potential as a city of strategic value. Count on our commitment for the mutual benefit of the peoples whose lives we aim to improve through our policy research and recommendations.

I look forward to a fruitful discussion, and Fundación Alternativas extends its appreciation to the Secretariat for organizing this Annual Meeting.