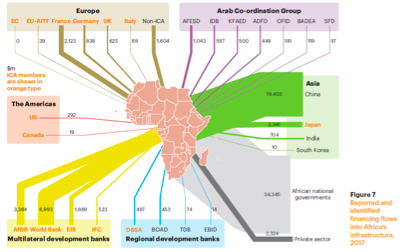 ICA members committed $19.7bn in 2017, up from $18.6bn in 2016. Excluding the exceptional Power Africa contribution of $7bn to 2013 figures, this is the highest figure reported by ICA members since 2010 when commitments of $29.1bn were reported. For 2017, no data were received from the EC for Infrastructure Financing Trends in Africa. In the previous three years the EC committed an annual average of $822m to Africa’s infrastructure development.

Chinese funding appears to be back in a big way, but the amounts of identified funding from China vary substantially from year to year. The $19.4bn of Chinese funding in 2017 is similar to the $20.9bn announced in 2015. However, it is substantially higher than the $6.4bn and $3.1bn reported in 2016 and 2014, respectively.

Contributions from non-ICA bilaterals and multilaterals apart from China decreased from around $3.1bn in 2016 to $2.9bn in 2017. The main reason for  this decline is lower investments from India. The upward trend of ACG commitments in recent years appears to be declining. For example, commitments from the Arab funds dropped from $5.5bn in 2016 to $3bn in 2017. Commitments from non-ICA European development finance institutions (DFIs) and multilaterals increased significantly from $393m in 2016 to $1.6bn in 2017. In 2017, private sector funding as reported on the World Bank’s Private Participation in Infrastructure Project Database reached a low of $2.3bn. The New Development Bank (NDB), the multilateral development bank established by the BRICS states, reported no commitments to Africa in 2017. Africa50, the infrastructure investment platform established by AfDB, indicated that it would invest $8m in the Egyptian energy sector.