As part of a broader effort to assess Chinese infrastructure development in the Latin American and Caribbean (LAC) region, the Inter-American Dialogue’s Asia and Latin America program has compiled a database of the many road, rail, port, and other transport infrastructure projects that have attracted Chinese support and investment since 2002. These deals are in various stages of development, from mere concepts to fully operational networks.

The scale of Chinese activity in this sector is nonetheless noteworthy, with projects underway across the region, including in Central America and the Caribbean. To date, Chinese companies and banks have indicated interest in approximately 150 transport infrastructure projects in LAC and have delivered a considerable portion thereof. As the Belt and Road lands in Latin America, governments will be looking to China for more transport-related support.

We are pleased to share the following five key takeaways from our data set and corresponding map. 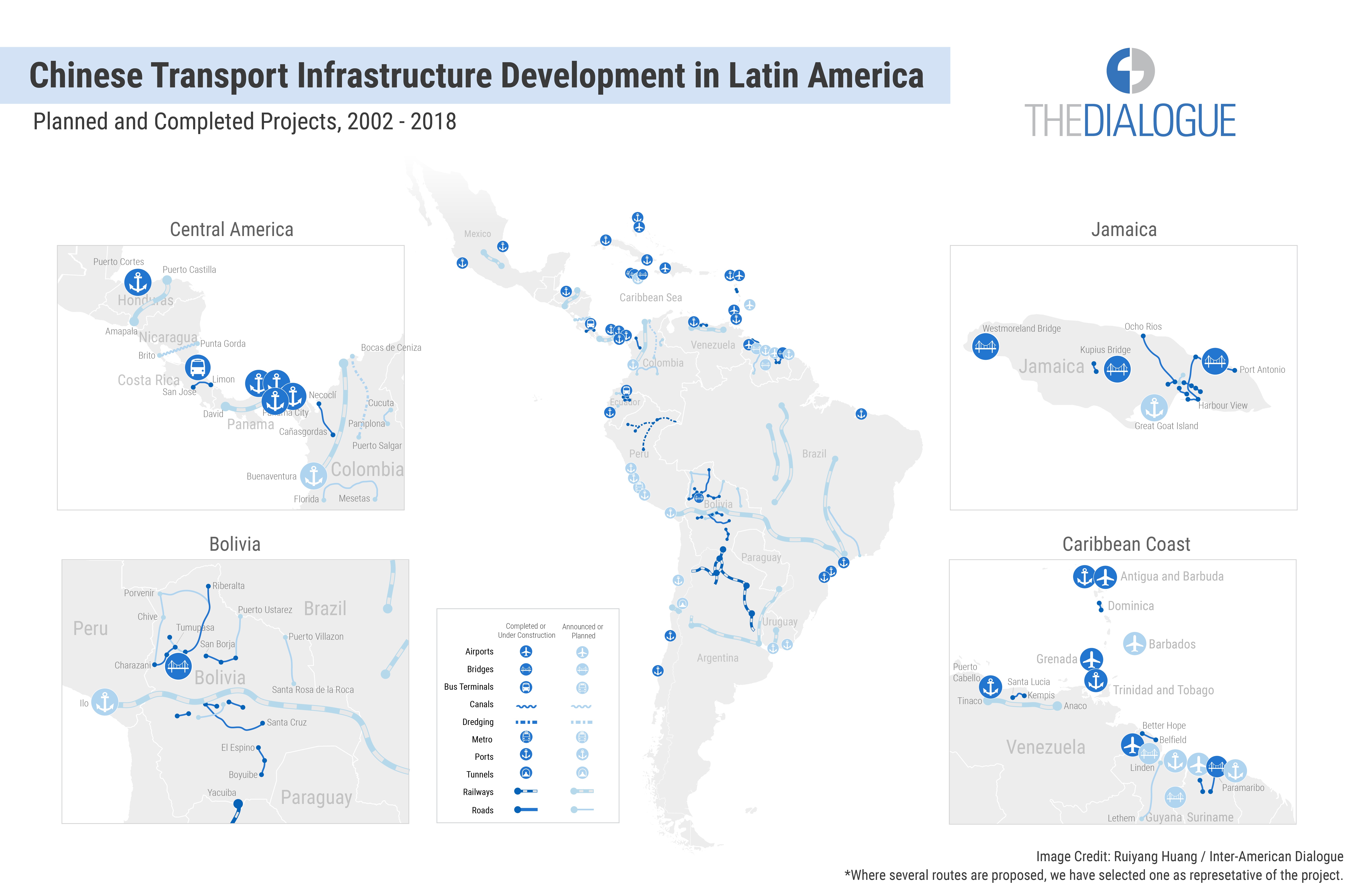 1. China’s construction of transport infrastructure in LAC has grown over the past five years.

Now that the China-backed Belt and Road Initiative has taken root in the Latin American and Caribbean region, hopes are high that Chinese investment will address some of the region’s most pressing transportation needs. As more and more LAC governments sign Belt and Road Cooperation Agreements with Beijing, the region will be looking for additional support from Chinese banks and construction companies, which have invested extensively in road, rail, ports, and other transport infrastructure for nearly two decades.

New Chinese transport infrastructure investment will depend on numerous factors, including political and economic developments in the region and China’s domestic reform agenda. At the moment, though, Chinese transport infrastructure activity is at a relative high. According to our data, nearly 40 percent of China-backed construction projects broke ground in the past five years alone.

2. Of the many projects in which China has expressed interest, about half have materialized.

Since 2002, China has expressed interest in developing about 150 transport infrastructure projects in Latin America and the Caribbean. As of 2018, about half of these projects had entered some phase of construction. A few others have been cancelled or delayed, and several are being studied by governments or companies for technical and financial feasibility, or else have yet to be awarded to specific developers.

3. China has been most successful in acquiring and building port facilities in LAC.

Chinese companies have expressed considerable interest in road construction in the region—road projects account for about a third of our data set—but have been most successful in negotiating port deals, with about twenty port projects either in progress or already completed thus far. These vary considerably in type and scale, from dredging and expansion deals to construction and/or operation of entire ports. In other cases, Chinese companies have acquired existing port facilities. Two terminals of the Santos port in Brazil were acquired by Chinese shipping firm COFCO in 2014 and 2015, for example, as part of the company’s purchases of a majority share in Dutch firm Nidera and all of Hong Kong’s Noble Group’s soft commodities arm.

4. Chinese construction companies are engaging across the entire region, but with particular focus on Bolivia, Brazil, and Jamaica.

When looking strictly the number of Chinese transport infrastructure projects being developed in LAC, Bolivia has been a primary destination for Chinese investors. Since 2013, Chinese companies have pursued over twenty road and bridge projects in Bolivia. The companies carrying out these projects include construction giants such as China Harbour Engineering (CHEC) and China Railway Construction Company, along with Chinese oil major Sinopec and Sinohydro, which has also been responsible for hydroelectric dam construction in the country.

About thirteen transport infrastructure deals have been proposed in both Jamaica and Brazil, but with far more progress in the Caribbean nation. China Harbour and China Eximbank were responsible for nearly all of China’s transportation-related deal-making in Jamaica.

5. China Harbour stands out among its peers in LAC.

China Harbour Engineering Company is by far the most active Chinese infrastructure company in Latin America, having developed a presence across much of the region. The company has been involved in about a quarter of our documented transport infrastructure projects. China Harbour was involved in the expansion of Panama’s Colon Container Terminal, which over the course of two years added a fourth berth to the already-busy port. Other projects include the Manzanillo Container Terminal in Mexico and the North Abaco Port in the Bahamas.