BRI: Quest for a better tomorrow—— the CPEC Example by Mushahid Hussain 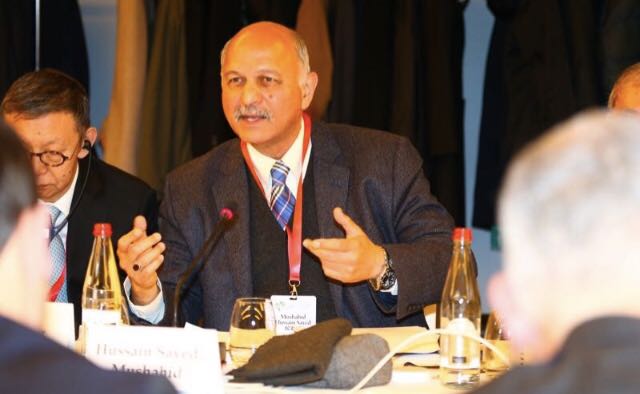 In 2013, when President Xi Jinping announced the launching of the Belt and Road Initiative (BRI), which is turning to be probably the most significant diplomatic and developmental strategic initiative of the 21st century.  This announcement was made in two parts, first, the Silk Road Economic Belt which is the land route or the revival of the historic Silk Road which was the old trade communication of China with Europe through the Central Asian and Middle Eastern land mass while the Maritime Silk Road provides for connectivity via ports through the sea route.  BRI also announced the launch of six different corridors that would connect China with other Asian countries.  The China Pakistan Economic Corridor (CPEC) is the only bilateral corridor and of the 70 countries that currently constitute part of the BRI, Pakistan has singular importance as the only one which is connected both by land and sea with China through the Gwadar port.  Hence, the significance and centrality of CPEC as the flagship, pilot project of OBOR.  And with an outlay of almost 60 billion dollars, CPEC is the largest comprehensive project with any foreign country in the history of international relations.

There is also an important geo-political context of BRI which needs to be understood with new global and regional realities that are emerging in the 21st century.

There is, first the emerging reality of a perceptible shift in the global balance of economic and political power away from the West to the East, with the 21st century now being considered as the “Asian Century”.  The lessening of political clout of Europe and the United States is discernible with new power centres emerging in an increasingly a multi-polar world.

The second major reality is the evolution of China from a regional power to a global power with its vast economic strength, increasing political clout and fast growing technological prowess having an impact.  According to the recently released report of the United States National Science Foundation and the National Science Board, the fundamental conclusion of the report says that: “China has become, or is in the verge of becoming a scientific and technological super power”.  As President Xi Jinping told the 19th CPC Congress last year, “China is at the counter-stage of world affairs”.

The third emerging reality is the emergence of a new geo-economic area of connectivity in which Pakistan is the hub, namely, a greater South Asia that include not only the South Asia subcontinent but also China, Iran, Afghanistan, Myanmar and the Central Asian republics of Kazakhstan, Kirghizstan, Tajikistan, Turkmenistan and Uzbekistan.  Driven by economy and energy, this greater South Asia is being woven together by ports and pipelines, roads and railway and new land and transportation routes reinforced by digital connectivity.

BRI currently involves over 65 countries, comprises 70% of the world population, 55% of the global GDP and nearly 25% of global trade.  $ 5 trillion are expected to be spent for infrastructure in the BRI countries in the next five years.

The reason for the popularity of the BRI is two-fold.  First, since 1980 China being a success story in the economic development has lifted 700 million people out of poverty, which is probably the most remarkable social development in the human history.  Second, OBOR has three key ingredients that makes it popular as the way-forward: It is inclusive, which means that it is not directed against anybody, but includes and invites all the countries to participate in the project, it is a win-win cooperation, which means there is no loser, everybody wins and everybody gains, it is about the connectivity by reviving the ancient Silk Road which links continents, countries and cultures through the land and the sea.  The train that came from London to China in a fortnight testifies to this connectivity. Pakistan is fortunate that China as the best friend of Pakistan has reposed a vote of confidence in the people of Pakistan on CPEC, which is the flagship project of the BRI and Gwadar is the center piece of CPEC.

The CPEC is promoting a new regionalism through economy and energy, through ports and pipelines, through roads and railways making Pakistan the pivot of the regional cooperation, in the era, when the world is witnessing a shift in the global balance of economic and political power from the West to the East.

Already, within a short span, CPEC has turned around Pakistan's image from propaganda of a “failing state” to an emerging market that is an investor's friendly destination.  Pakistan's GDP is projected for a higher growth, thanks to CPEC.  Dead projects like Thar coal and Gwadar port have been revived. Pakistan's energy crisis is close to resolution within, thanks to CPEC, and the country itself is being connected through roads and highways via CPEC.  60,000 Pakistanis now work directly in the Chinese projects in Pakistan. CPEC is also a force-multiplier for alleviating the under-developed regions like Baluchistan, KPK, Gilgit-Baltistan and FATA.

However, CPEC has not just brick and mortar alone, it is also as the Pakistan-China Institute gave the 3C concept four years ago about “Corridors, Culture and Connectivity”.  Today 25,000 Pakistanis are learning Chinese language and 22,000 Pakistanis students are now studying in China and last year saw the highest number of visitors from China to Pakistan and Pakistan to China.  Contrary to the propaganda peddled by Western interests, the number of Chinese working on different projects in Pakistan is still quite modest.  There are 19581 Chinese experts, engineers and technicians working on CPEC projects in Pakistan.  And there are another 20,000 Chinese engineers, experts, technicians and business persons working on non-CPEC projects in Pakistan.  So far, $ 23 billion have been pumped in by China in various projects in Pakistan.

Today, CPEC is also the pillar of the resilient and robust Pakistan-China relationship that is rightly considered unique as an “All-weather friendship” between the two Iron Brothers.  Mutuality of interests, absence of friction and a congruent worldview have influence what is truly a unique relationship in the annuls of international relations.  Pakistan and China have stood by each other since the past 5 decades and both countries protect and promote each other’s core interests.

What are China’s core interests?  These can be summed up as:

Ø  Unity and territorial integrity of China (unlike India, Pakistan had already signed a bordering agreement with China in March 1963 and today, there is no border issue between the two countries);

Ø  Primacy of the CPC given its pivotal role in strengthening stability within the country;

Ø  The peaceful rise and development of China which Pakistan sees as a source of strength for small and medium Asian countries, given China’s track record of standing by the Third World countries;

Ø  Issues like Taiwan, Tibet, Xinjiang and South China Sea where Pakistan stands by China in all respect.

What are Pakistan’s core interests with China has always helped protect?  These can be summed up as:

Ø  Protection of unity, territorial integrity and national independence of Pakistan;

Ø  Pakistan’s successful role in the inland war against terrorism and extremism, where China accepts Pakistan’s narrative is the biggest victim of terrorism;

Ø  Protecting Pakistan against threats of bullying, hegemonism and isolation, from India and others in the West;

Ø  Pakistan’s quest to seek a peaceful and prosperous future for its people via regional connectivity under the framework of BRI with CPEC its main pillar.  Thanks to China standing by Pakistan, India couldn’t join the UN Security Council nor the Nuclear Suppliers Group.

Finally, after initially laying the foundation of an enabling environment, what does the future hold for CPEC and Pakistan’s quest for a better tomorrow?  In fact, the best is yet to come in terms of the “opportunity of a lifetime” provided by CPEC for Pakistan and the region.  During the 7th meeting of the Joint Cooperation Committee (JCC), which is the apex decision making body on CPEC, held in Islamabad in November 2017, the Long Term Plan (LPT) of CPEC was unveiled and it has incorporated some new key areas for future development including agriculture, people to people connectivity through culture and tourism, education and information technology and Special Economic Zones which are being development to host some of the relocated Chinese industries that are no longer economically feasible in China itself given the high labour costs there.

Some 80 million new jobs will be generated in the next decade when small and medium enterprises of China relocate to other countries like Pakistan, Sri Lanka, Cambodia and Vietnam.  The fiber optic cable from China via Kashgar to Islamabad will improve the digital capability of Pakistan.  The ML-I railways up-gradation and dualization project will modernize the Pakistan Railways system through a 1872 KM railway route from Karachi to Torkham doubling the speed of Pakistani trains to 160 KM per hour.

Pakistan should view China as a market for its products just as China views Pakistan as a market which can also serve as a potential destination for Pakistan’s quality milk and meat experts.

2018 marks the 40th anniversary of the launch of historic reforms and course correction under the visionary leadership of the great Chinese statesman, Deng Xiaoping.  Pakistan too can learn from the wisdom of Deng Xiaoping whose policies marked by consensus, connectivity and course correction resulted in two historic achievements that have no parallel in human history.  For a straight 30 years, China had a record 10% growth rate per annum, and, in the course of a generation, China has managed to lift a record 700 million people out of poverty, and brought them to the middle class mainstream.

Pakistan-China relations have stood all the difficulties and changes on the geo-political landscape as well as within their own countries, surmounting obstacles to reinforce this robust and resilience relationship.  In building a better tomorrow for the people with CPEC as its centerpiece, nothing can be more inspiring than the famous couplet from Chairman Mao:

“Nothing is hard in this world,

If you dare to scale the heights!”