A New Model of Multilateral Development Bank: a Comparative Study of Road Projects by the AIIB and ADB 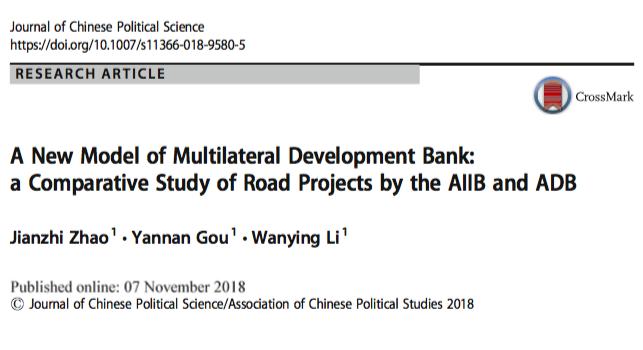 （Journal of Chinese Political Science）As one of the hallmarks of China’s increasing participation in global economic governance, the establishment of the Asia Infrastructure Investment Bank (AIIB) has been widely studied by scholars and policy circles worldwide. However, most of the existing studies use narrative methods and lack microscopic or macroscopic evidence. By selecting two highly comparable cases, road projects from the AIIB and the traditional multilateral development bank, the Asian Development Bank (ADB), we analyze the management structure, procurement, economy, risk, and supervision and safeguard policy framework for both cases. We find that the AIIB mostly aligns with international practices in critical principles but has streamlined project procurement, risk and supervision, which reflects its claim of being “lean” and “clean”. We argue that compared with the ADB, the AIIB is probably more efficient and economically sustainable, which is an improvement on the traditional multilateral development banks (MDBs). However, whether the streamlined procedures lead to higher risks will be tested in time as the AIIB conducts more independent projects in the future.