There is large room for further cooperation between the Netherlands and China, in particular in sustainable agriculture, green energy, healthcare and trade in the post-pandemic era in light of the common goal of "build back better", said Wim Geerts, ambassador of the Netherlands to China.

Just having celebrated the 49th anniversary of the establishment of official diplomatic relations between China and the Netherlands a few weeks ago, Geerts recalled the frequent high-level visits and exchanges, especially President Xi Jinping’s state visit in 2014 and the mutual support and cooperation since the outbreak of the COVID-19 pandemic.

"Next year marks the 50th anniversary of the bilateral relationship, which is a good time to celebrate a golden age between the two countries," said Geerts, who stressed the importance of people-to-people exchanges and hoped international travel will resume in 2022.

Taking office in Beijing about two years ago, Geerts witnessed the speed and scale of Chinese economic development, green transformation, and the boom of e-commerce. He believes cooperation could be closer between China, the world’s second-biggest market, and the Netherlands, one of the most influential EU countries. For example, bilateral trade has not been impacted by the pandemic, and more trains journey between Chinese cities and logistics hubs like Tilburg in the Netherlands, which makes trade more convenient and sustainable. He also said the two countries could promote third-party cooperation, especially in Africa.

Geerts made the remarks on June 2 in a speech given to the DRC Chair, a forum held by the Development Research Center of the State Council. The DRC Chair offers international cutting-edge academic lectures and policy dialogues, and promotes the sharing of wisdom and consensus among politicians, think tanks, academia and the business sector worldwide.

Regarding the questions many DRC researchers have raised in terms of trade, Geerts said the Netherlands holds dear multilateralism, free trade and the WTO-centered rule system of trade. As a part of the 27-member EU, the Netherlands hopes to see more communication between China and the EU from all levels and all sides, he said. 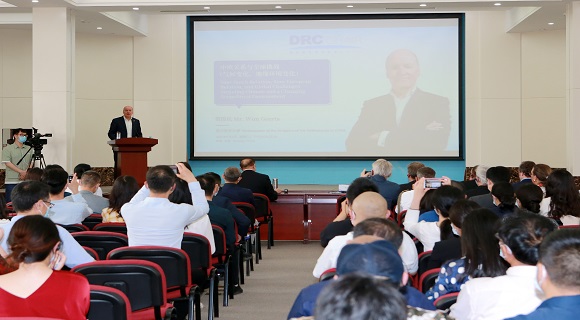 Wim Geerts, ambassador of the Netherlands to China, at the 5th DRC Chair