BEIJING, Aug. 27 (Xinhua) -- President Xi Jinping on Monday underlined thorough and solid cooperation under the Belt and Road Initiative (BRI) to benefit people in countries involved and build a community with a shared future for humanity.

Xi, also general secretary of the Communist Party of China (CPC) Central Committee and chairman of the Central Military Commission, addressed a symposium held in the Great Hall of the People in Beijing, marking the fifth anniversary of the BRI.

In the autumn of 2013, respectively in Kazakhstan and Indonesia, Xi proposed the building of the Silk Road Economic Belt and the 21st Century Maritime Silk Road -- the Belt and Road Initiative for short.

As of July 2018, more than 100 countries and international organizations had signed Belt and Road cooperation documents with China, extending the initiative's scope from the Eurasian continent to Africa, Latin America and the Caribbean, and the South Pacific region.

Xi stressed that the initiative serves as a solution for China to participate in global opening-up and cooperation, improve global economic governance, promote common development and prosperity, and build a community with a shared future for humanity.

The next priority of jointly advancing the initiative is to realize its high-quality development, Xi said.

Xi asked for efforts to push for progress in Belt and Road projects, especially those delivering real benefits to local people, and keep expanding the market while maintaining the balance of trade.

He advocated a policy system on financial support for the BRI and encouraged non-governmental funds to invest in infrastructure and resource development projects in Belt and Road countries.

Under the initiative, China has set up 81 education institutions and projects as well as 35 cultural centers in countries along the Belt and Road.

Xi stressed that investment activities should be regulated and businesses should operate in accordance with laws and regulations, pay attention to environmental protection, and fulfill their social responsibilities.

In the first seven months of 2018, Chinese companies raised investment in 54 countries along the Belt and Road. The 8.55-billion-U.S. dollar newly added investment represented an 11.8 percent increase year on year.

The China-Europe freight rail service network, a crucial part of the BRI, has expanded rapidly. Sunday's arrival of freight train X8044 from Hamburg, Germany marked the 10,000th trip since the beginning of the freight rail's operation in 2011.

For the past few years, trains have rumbled along the route, taking garments, auto parts, chemicals and other Chinese goods to European consumers, while bringing back European food, machinery and equipment, as well as timber products.

Xi pointed out that jointly pursuing the BRI was not only aimed at economic cooperation but also an important pathway to improve global development patterns and global governance and promote the healthy development of economic globalization.

Last year, Beijing hosted the first-ever Belt and Road Forum for International Cooperation, attended by state and government leaders of 29 countries. The more than 1,600 participants came from over 140 countries and 80 international organizations.

"The broad support for the BRI shows aspiration from countries involved, developing countries in particular, for peace and development," Xi said, noting the BRI is an initiative for economic cooperation, instead of a geopolitical alliance or military league, and it is an open and inclusive process rather than an exclusive bloc or "China club."

"It does not differentiate countries by ideology nor play the zero-sum game. As long as countries are willing to join, they are welcome," Xi said.

Vice Premier Han Zheng, also a member of the Standing Committee of the Political Bureau of the CPC Central Committee and head of the leading group on advancing BRI development, presided over the meeting. 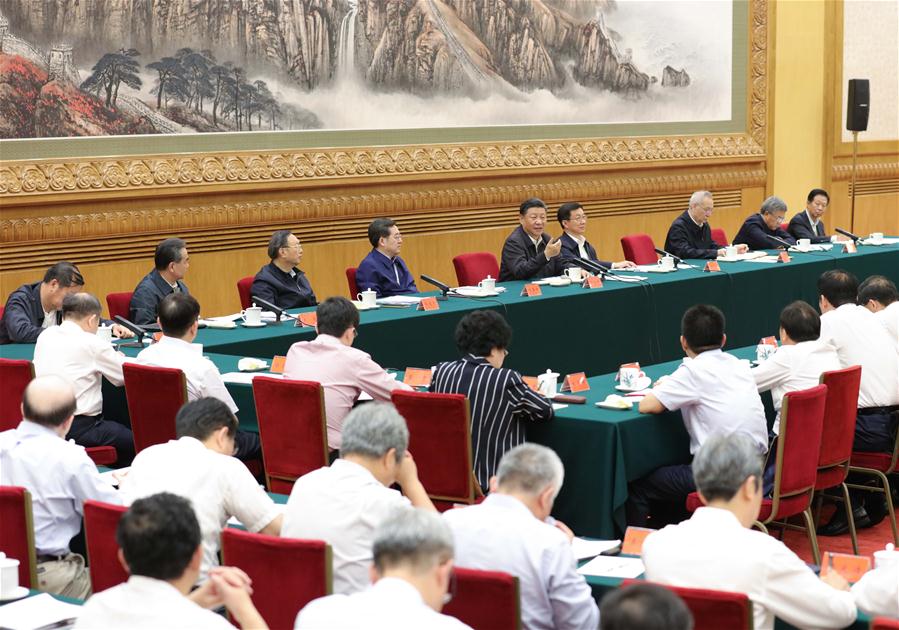 Chinese President Xi Jinping (C, rear), also general secretary of the Communist Party of China (CPC) Central Committee and chairman of the Central Military Commission, addresses a symposium marking the fifth anniversary of the Belt and Road Initiative (BRI) in the Great Hall of the People in Beijing, capital of China, Aug. 27, 2018. (Xinhua/Huang Jingwen)