President Xi Jinping's vision of building a community with a shared future for mankind has become an important international consensus echoed by many countries, organizations and political parties in the past year, according to international relations analysts. 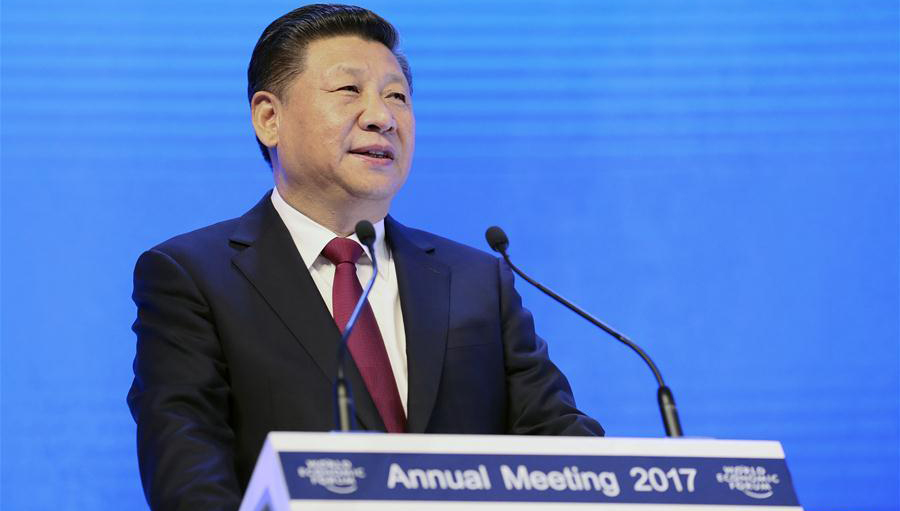 President Xi Jinping takes the podium on the first day of the World Economic Forum in Davos, Switzerland, on Jan. 17, 2017. (Photo/Xinhua)

President Xi Jinping's vision of building a community with a shared future for mankind has become an important international consensus echoed by many countries, organizations and political parties in the past year, according to international relations analysts.

As political leaders including US President Donald Trump are meeting in Davos, Switzerland, to discuss the future of the global economy and politics this week, the proposals raised by Xi during his Swiss trip a year ago remain a positive force to improve global governance systems, analysts said.

Xi said that by building a community with a shared future for mankind, people's lives around the world can be improved, a view that still enlightens political and business leaders at this year's meeting.

On Jan. 18, 2017, Xi made a keynote speech at the United Nations Office in Geneva titled Work Together to Build a Community with a Shared Future for Mankind, offering China's solutions to cope with global challenges.

The president's speech drew strong and positive feedback from the international community. A month later, the Chinese concept of building "a human community with shared destiny" was incorporated into a UN resolution for the first time at the 55th UN Commission for Social Development on Feb 11.

Since then, the idea has been endorsed by the UN Security Council, the UN Human Rights Council and the UN General Assembly, turning the Chinese concept into an international consensus.

Rana Mitter, director of the Dickson Poon University of Oxford China Centre, said that China's role "continues to be central" to this year's World Economic Forum meeting in Davos from Tuesday to Friday.

"Xi's speech last year set an agenda, and it is important that China continues to express a collaborative and engaged viewpoint as these questions are debated in the year to come," he said.

Issues of shared human values, economic integration and engagement during international crises, whether in the Middle East, South Asia or elsewhere, continue to be central global concerns, and China's attitude toward these questions is crucial, he added.

Jon Taylor, a China scholar and professor at the Political Science Department at Houston's University of St. Thomas, said that Xi's concept of a shared future for mankind is still quite relevant in a world in which Trump thinks that the parochial economic interests of the US take precedence over a global approach that is marked by increasing trade, capital flows and economic integration.

"Xi's observation from his 2017 Davos speech continues to resonate today in light of Trump's populist and protectionist rhetoric: 'Whether you like it or not, the global economy is the big ocean that you cannot escape from,'" he said, quoting Xi.

Erik Berglof, director of the Institute of Global Affairs at the London School of Economics, said that Xi's speech at the UN Geneva Office a year ago came at a time "when much of the world was looking for leadership on the global issues of trade, climate and development and a more optimistic view of the opportunities coming from globalization".

Berglof spoke highly of the China-proposed Belt and Road Initiative, saying that it is "clearly a bold and open vision for global development".

The Belt and Road Initiative, which comprises the Silk Road Economic Belt and the 21st Century Maritime Silk Road, aims to build trade and infrastructure networks connecting Asia with Europe and Africa via overland and maritime routes.

In May, representatives from 130 countries, including 29 heads of state or government, and scores of international organizations, participated in the Belt and Road Forum for International Cooperation in Beijing, where more than 270 projects aimed at enhancing the global cooperation network were finalized.

Stephen Perry, chairman of The 48 Group Club trade association, said that with regard to Xi's comments on globalization and the Belt and Road Initiative last year, the concrete impact and outcomes "are to be seen in transnational infrastructure development being incorporated across the world".

"Nations are not thinking of just building infrastructure for themselves, but for them and their neighbors. The world cannot do it on a national basis anymore. That is what they take from President Xi's words," he said.

Although Xi is not present at this year's panoply of leaders gathered in Davos, his presence and the presence of China has been felt there, said William Jones, the Washington bureau chief for Executive Intelligence Review, a US newsmagazine founded more than 40 years ago.

"The rise of China, with its own particular philosophical outlook, has brought with it a new spirit, a spirit of harmony and cooperation," he said.

Scott Kennedy, deputy director of the Freeman Chair in China Studies at the Center for Strategic & International Studies, said that the leaders of the World Economic Forum "are very sensitive and aware that Xi Jinping's speech last year was historic and very well received".

"My hope would be that the rhetoric of openness and liberalization and reform ... increasing productivity is matched by actions by China and by others," he said.

Xi, the first Chinese head of state to have attended the Davos meetings, called at last year's World Economic Forum for joint efforts to chart the course of economic globalization and forge new models of global growth, cooperation, governance and development.

"Whether you like it or not, the global economy is the big ocean that you cannot escape from. Any attempt to cut off the flow of capital, technologies, products, industries and people between economies, and channel the waters in the ocean back into isolated lakes and creeks, is simply not possible," Xi said.

The president called on the international community to face up to the problems caused by globalization instead of dodging them.

"What most impressed participants and the media was the president's commitment to an open and collaborative spirit when addressing shared challenges," Schwab was quoted as saying.

On Tuesday, Indian Prime Minister Narendra Modi said in his speech at the forum that protectionism was resulting in new trade barriers and reduced investment across borders.

"The forces of protectionism are raising their heads against globalization," he said. "Their desire is to not only save themselves from globalization, but to reverse the natural flow of globalization altogether."

CNN said it is the second consecutive year that the leader of a major Asian power has used the coveted speaking slot to warn against a retreat from globalization.

"President Xi Jinping's statements, a year on, continue to be an important stage-setter for the argument that international trade must continue to flow openly and freely," said Mitter of the Oxford China Centre.

If China and Europe cooperate in maintaining a liberalized global trading system, it will be an important signal to the wider world, he said.