Ivan Safranchuck: The Prospects of the Connection Between the Construction of the Silk Road Economic Belt and the Eurasian Economic Union 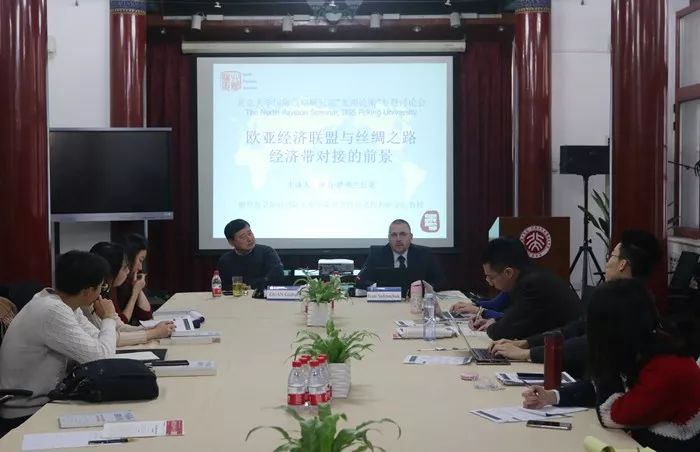 On the afternoon of January fourth, 2019, the IISS held the 29th North Pavilion Seminar，the presenter was Ivan Safranchuck, the associate professor of the Department of World Political Process of Moscow Institute of International Relations in Russia. The theme of the seminar was “The Prospects of the Connection Between the Construction of the Silk Road Economic Belt and the Eurasian Economic Union”. The host was Guan Guihai, the executive vice president of Institute of International and Strategic Studies of Peking University.

Safranchuck is a member of the Russian Foreign and Defense Policy Committee and the expert group of the Valdai International Debate Club. His academic research covers issues of US-Russian relations, arms control and international security, regional studies (Central Asia and Afghanistan) and globalization etc.

Since May 2015, the leaders of China and Russia signed the "on the Construction of the Silk Road Economic Zone in Cooperation with the Construction of the Eurasian Economic Union of the Butt Joint Statement" in Moscow, Safranchuk believes that the relevant consensus has not yet been implemented. In his view, understanding this fact needs to start from the similarities and differences of intentions behind the two projects.

After the collapse of the Soviet Union, Russia has established an economic development program to draw closer to the world and reduce its dependence on its neighbors. Regional cooperation stagnated in the 1990s. In the 21st century, facing more and more serious security threats, Russia has gradually realized that in the long run, economic cooperation is an urgent need in Central Asia. At the same time, trade with neighboring countries increasingly occupies an important source of Russian economic growth. In 2008, the global financial crisis hit Russia, Kazakhstan and other non-Western countries hard, which forced Russia to change its thinking and seek more power for economic growth from regional cooperation rather than global development.

Safranchuk pointed out that the Eurasian economic alliance is a regional cooperation mechanism based on internal protectionism. The difference is that the Silk Road Economic Belt represents China's intention to interconnect with major economic development centers in the world and actively maintain contact with the outside world. Although the intentions of the two sides do not conflict with each other and there is a basis for reaching the docking cooperation between the two countries, the differences in their fundamental intentions also result in inevitable constraints in the implementation of specific actions. Safranchuk also said that regional cooperation and global projects have their own advantages and disadvantages for the local oligarchs and governments in Central Asia, which is a difficult choice. The successful docking of Eurasian Economic Union and Silk Road Economic Belt still depends on the efforts of China and Russia in interest reconciliation.

In the final discussion session, Safranchuk and the teachers and students present in-depth exchanges and discussions on globalization, the tripartite dialogue between China, Pakistan and Afghanistan, and the current situation of the SCO development.