The year 2017 has seen the fourth year of implementation of the ambitious Belt and Road Initiative. The Belt and Road construction has gradually turned from concept to practice and yielded a batch of important early harvest outcomes, building a cooperation network connecting continents and oceans.

With 46 entities joining the B&R friends circle in 2017, China has signed 100 cooperation agreements under the Belt and Road Initiative with 86 countries and international organizations. Chinese President Xi Jinping pointed out that all countries, from either Asia, Europe, Africa or the Americas, can be international cooperation partners of the Belt and Road Initiative.

In 2017, the trade and investment has increased significantly, the major projects have made remarkable progress, and the cooperation in infrastructure, production capacity, investment and digital Silk Road has deepened.

Statistics show that, in the first 11 months of 2017, the trade volume between China and the countries along the Belt and Road routes reached US$983 billion, up 15.4% year on year. China has signed 4 new free trade agreements this year, taking the total number of FTAs to 16, benefiting 24 countries and regions. The Asian Infrastructure Investment Bank (AIIB) has expanded membership to 84 and invested a total of US$4.22 billion in 24 projects. The Silk Road Fund has signed 17 projects and promised to invest about US$7 billion. The Belt and Road construction has embarked on a fast track.

Xi: Build a community of shared future for mankind

On Mar. 17, the United Nations Security Council unanimously adopted Resolution 2344(2017) to extend the mandate of the UN assistance operation in Afghanistan, which also urged more efforts to strengthen regional economic cooperation through initiatives such as the Belt and Road.

China launched its official Belt and Road Portal (www.yidaiyilu.gov.cn) on Mar. 21. The portal, developed under the guidance of the Office of the Leading Group for the Belt and Road Initiative and hosted by the State Information Center, aims to promote information sharing among enterprises, social organizations and citizens of the countries along the Belt and Road routes.

The Boao Forum for Asia Annual Conference 2017, under the theme of "Globalization and Free Trade: The Asian Perspectives," was held from Mar. 23 to 26 in Boao in China's southernmost province of Hainan. The Belt and Road was given the first place among the four themes of the annual conference.

Chinese Premier Li Keqiang paid an official visit to New Zealand from Mar. 26 to 29. During the trip, the two countries signed the Memorandum of Arrangement on Strengthening Cooperation on the Belt and Road Initiative between the Government of the People’s Republic of China and the Government of New Zealand, making New Zealand the first Western developed country to sign a cooperation agreement with China on the initiative.

A third group of free trade zones (FTZ), including seven Chinese provinces and municipalities including Liaoning, Zhejiang, Henan, Hubei, Sichuan, Shaanxi and Chongqing, were set up on Apr. 1, bringing the total number of the zones to 11. China established its first FTZ in Shanghai in 2013, and expanded to three more provincial-level areas of Tianjin, Fujian and Guangdong. The FTZs help carry out major national endeavors such as the Belt and Road Initiative.

The China-Myanmar crude oil pipeline starts from Made Island, stretches as long as 771 kilometers, and ends in China's Yunnan Province, with a designed transmission capacity of 22 million tons per year. The pipeline passes through Myanmar's Rakhine state, Magway and Mandalay regions and Shan state. Itis part of the China-Myanmar oil and gas pipeline project, a flagship cooperation project in Myanmar under the Belt and Road Initiative.

Railway authorities of China, Belarus, Germany, Kazakhstan, Mongolia, Poland and Russia signed an agreement on Apr. 20 to deepen cooperation on China-Europe freight rail services. The agreement serves to promote the Belt and Road construction and expand the market share of rail freight between Asia and Europe. It will also boost economic development and trade cooperation for countries along the Belt and Road routes.

The China-Georgia free trade agreement (FTA) is the first FTA that China accomplished in Eurasia, and also the first FTA China initiated and signed since the Belt and Road Initiative was proposed. According to the agreement, the two countries impose no tariff to most of the products from each other. The FTA went into effect on Jan. 1, 2018. 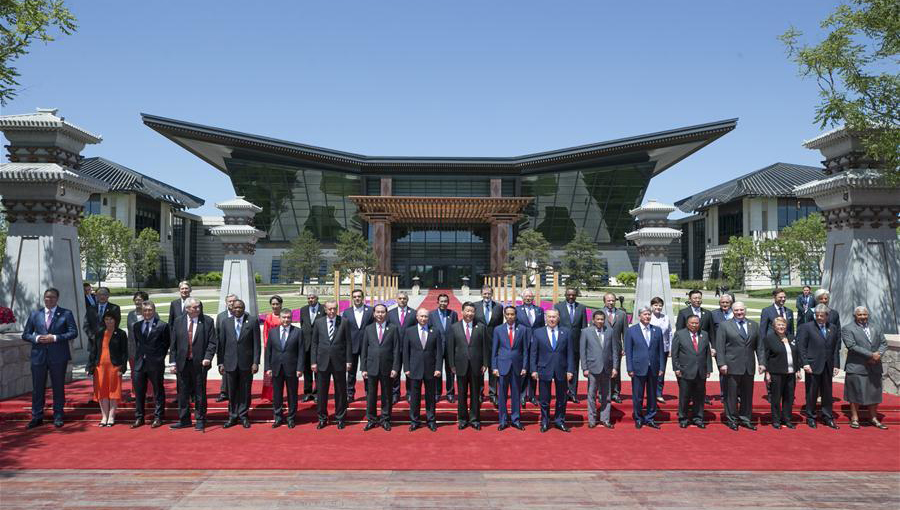 Chinese President Xi Jinping, foreign delegation heads and guests pose for a group photo at the Leaders' Roundtable Summit of the Belt and Road Forum (BRF) for International Cooperation at Yanqi Lake International Convention Center in Beijing, capital of China, May 15, 2017. (Xinhua/Yao Dawei)

The Belt and Road Forum for International Cooperation was held in Beijing from May 14 to 15. The forum was an international event of the highest-level under the Belt and Road framework, and also the most important multilateral diplomatic event that China initiated and hosted since the founding of the People’s Republic of China.

29 heads of state and government leaders as well as more than 1500 representatives from over 130 countries and 70 international organizations attended the forum.

The forum further confirmed the direction for future cooperation of the Belt and Road Initiative, outlined the roadmap of the Belt and Road construction and listed a batch of major B&R projects to be implemented. The Belt and Road should be built into a road of peace, prosperity, opening up, innovation and a road connecting different civilizations.

Major deliverables of the forum include 76 items comprising more than 270 concrete results. The Chinese government signed memoranda of understanding on Belt and Road cooperation with the governments of Mongolia, Pakistan, Nepal, Croatia, Montenegro, Bosnia and Herzegovina, Albania, Timor-Leste, Singapore, Myanmar and Malaysia.